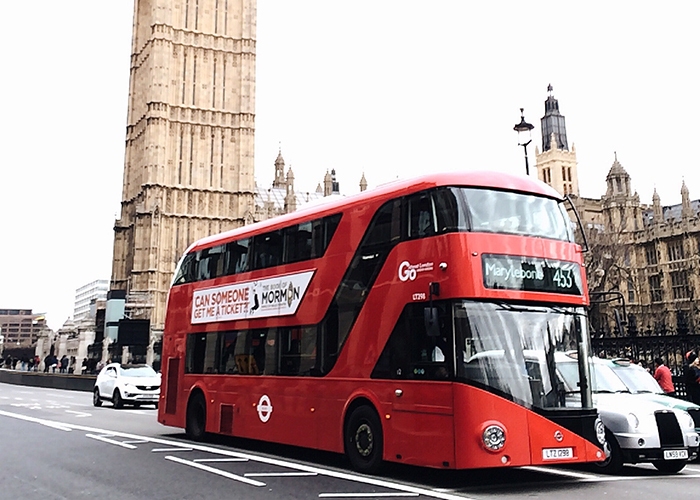 The public transport system in London was voted in 2005 to be the best in the world, however if you were to tell this to any Londoner you would likely to receive a torrent of abuse. However the tube is an efficient way to get around as long as you do not rely o it and there is an extensive bus network that works 24 hours a day, and as 9 out of 10 journeys in London are done on public transport, you will not be alone.

If you plan to stay for any length of time in London , it is well worth buying an Oyster card. They are both a cheaper and more convenient way of getting around London and can be used on buses, tube and trams. Oyster cards are purchased at underground stations for a three pound refundable deposit. They are then simply topped-up, again at the stations. When you enter and leave an underground station the card must be pressed against the yellow receiver and the amount due is then deducted from the card.

IMPORTANT
If you do not touch in and out you will be charged the maximum cash fare, which is almost double the maximum Oyster fare.

Not only is the Oyster Card more convenient, it is also a lot cheaper, often as much as half the price.

Travel Cards are the only other sensible way to travel the tube, although still more expensive than the Oyster card. Day Travel Cards (Peak) can be used Mondays to Fridays (except public holidays). Day Travel Cards (Off peak) can be used from 0930 Mondays to Fridays, Saturdays, Sundays and public holidays. Both types of cards should be consumed on the day of validity or on any journey that starts before 0430 on the following day.

A One Day Family Travel Card is cheaper to use when traveling as a group, members of which need not be related. A typical group consists of one or two adults traveling with one to four children.

If travelling though the Tube and National Rail, the Travel Card must be valid for all zones. Travelling beyond the covered zones will require payment of an extension fare. Travel Card validity ranges from one day to one year.

London has a wide variety of venues and attractions to visit. Have a look at our cheap tickets page for details on how to get the best value.

2 for 1 and reduced priced tickets for London plays, musicals and comedy shows as well as other attractions like museums can be arranged through official agents that hold ticket allocations for each major venue. Hotel accommodation and restaurant bookings can also be included in the package to ensure maximum satisfaction in a visitor’s stay in London . This arrangement provides convenience and security as it allows one to enjoy the very best of London while purchasing tickets at good rates and without any risk.

As London offers so many attractions, a visitor may find it difficult to fit it all in a limited schedule. Being one of the most famous and exciting cities in the world, London does not disappoint expectations. A planned tour can help maximize the visit especially for those who do not know where to start.

London buses are probably the most famous mode of transport associated with London and there really is no better way to see Britain ‘s capital city. Have a look at our Travelling around London page for details of how to get about by Bus.

Getting around the streets of London is fairly easy, what with the many modes of transportation one can take. Those who wish to avoid being stuck in a traffic jam can take the tram in the London Underground. Cabs are also a common sight on the streets. However, buses seem to be a preferred mode of transportation, not only for its efficiency but also for its visual and somewhat historical appeal.

The bright red, double-decker Routemaster bus will always be identified with London , having been in the business of transporting passengers to and from their respective destinations since the 1950’s. In recent years though, and much to the disappointment of Londoners the Routemaster buses have been fazed out as they required a conductor as well as a driver, but they can still be seen and used as guided tour buses.

Passengers, especially tourists, should pay close attention to the bus stop signs, as they list the route numbers of the buses that stop there. However, some buses have “Request Only” signs. This means that a passenger should raise his hand to flag it down; otherwise, it will simply pass by.

The Routemaster buses lets passenger seat themselves first before asking for payment. In the newer buses, a passenger must pay upon boarding the vehicle. Remember to have exact change. Another option is to buy bus passes such as the London Travelcard. The said card allows for unlimited bus and Underground travel but will require a passport photo for identification. A more, unobtrusive travel card is the Visitor Card, which tourists can buy outside the UK . It doesn’t require a photo and even included discount vouchers for popular tourist attractions.

Find out more about London ‘s most famous mode of transport and maybe even arrange to take a tour.

If Venice has its gondolas and Prague has its horse-drawn carriages, London has its double-decker buses. This mode of transport is considered as one of the most preferred mode of transport for tourists who wish to see beauty of London . The said vehicle has gone many revisions in other countries but it grows out to be synonymous to the city.

Double-decker buses are a cheap alternative travelling option when you want to move around the town. With its fare usually less than a couple of pounds, it is definitely an inexpensive way of travelling around. These buses move fast throughout the town since they have their own lanes on several streets and they move against traffic flow. To signal your stop, you ring a bell to inform the driver that you’re ready to go.

Double Decker’s are also available at night but on a higher price than those that run on day. Visitors can enjoy the night bus rides until it terminates its operation at 6 a.m.

To really drink in the perfect view of the city passing by, the best thing you can do is to take the front seat of the top level. It is also advisable that you bring your maps and have it easily accessible in your handbag. You can also hire city guides to accompany you on your ride so that the tour comes in easier.

The majority of tour operators permit tourists to purchase tickets when they arrive. A lot of them provide a hop-on, hop-off option that allows you to cut your journey in order to stop by sights that have been passed along the way, and then go back on the tour on another bus. This is one cost effective alternative for those tourists who wants to see the most of London even on a tight budget.

Cruise Along the River Thames

If the weather’s nice, why not try a different and more relaxed way to sightsee by taking a boat tour along the Thames . Our guide will provide you with information about the sights and where to catch the boat.

The River Thames is one of London ‘s most popular tourist attractions. The river not only has historical significance, taking a cruise down the River Thames allows tourists to take in the sights in a unique, memorable, and relaxing way. In fact, taking a cruise is an experience in itself—the sun on your back, the wind at your feet, and the hum of the waves.

Tourists who include cruises as part of their itinerary will find the River Thames very accessible. Cruises depart everyday from Westminster Pier, Waterloo Millennium (London Eye) Pier, Tower Pier and Greenwich Pier except on Christmas Day. The prices normally range from as low as £2.80 for a child and £5.60 for an adult for a single trip. It may be necessary to book a cruise tour ahead of time, especially during peak tourist season. Information on booking a cruise tour is often available from travel agencies or the customer service desk of hotel accommodations.

The route normally begins at the Westminster Pier. The cruise then proceeds across the river to the Country Hall, once the headquarters of the London County Council, and then the Greater London Council. During the trip, visitors will also be able to see the infamous Tower of London, the Tower Bridge, St. Paul’s, Shakespeare’s Globe, Cutty Sark, the Old Royal Observatory, Queen’s House, Fan Museum, and other historical sites. Most cruise tours also include London ‘s highest seats of government, such as the Houses of Parliament and Whitehall , and the Westminster Abbey.

People who live quite far from designated bus or train stops need not fret as well. After all, car parks are at their disposal. The British Parking Association, with the cooperation of the City Government, gives accreditation to facilities that can ensure that a car owner’s vehicle remains safe while he is away. Most car parks are equipped with CCTV monitoring and weather protection systems, and even with credit card facilities for easier payment. One of the most trusted car parks in central London is Masterpark, which has been awarded Safer Car Park Awards many times over.

The worlds largest airport and getting larger with a new terminal almost ready and another runway planned. Heathrow airport is 15 miles west of London , on the M4 motorway, near the M25 interchange. Heathrow is served by a number of means of public transport, the Underground extends through the Piccadilly Line to the airport and it takes about an hour to get into central London . Alternatively you can get the Heathrow express which is a quicker, but more expressive way of getting into central London . It departs from Heathrow every 15 minutes and takes just 15 minutes, and arrives in London Paddington.

Gatwick Airport
This airport is considered to be the second largest and seventh busiest airport in the world today. With two terminals to serve its customers, car parking is also provided to ensure a more convenient accommodation for people prior to their flight. It is 28 miles (45km) south of London , directly linked to the M23 at Junction 9 and to the A23 London-Brighton road. Just a ten minute drive away, the M25 further connects the airport to the UK ‘s extensive road and motorway network.

Luton Airport
Another major airport in London , it is noted to be one of the fastest growing airports today. The airport is approximately 32 miles northwest from Central London and like most airports is open 24 hours daily. The airport is easily accessible from all over the country and located close to the M1 and M25. They also have conveniently located short-stay, executive and long-stay car parks for people who often travel to lessen their worries and enjoy their trips.

Stansted Airport
This airport is known to be one of the largest and fastest growing airports in London . To get to Stansted airport, it is located on the M11 motorway between London and Cambridge at Junction 8. The airport is approximately 20 minutes north of the M25 junction. The airport has placed sign posts on both the M25 and M11 motorways to serve as guides for the public.